History of the Triumph Spitfire 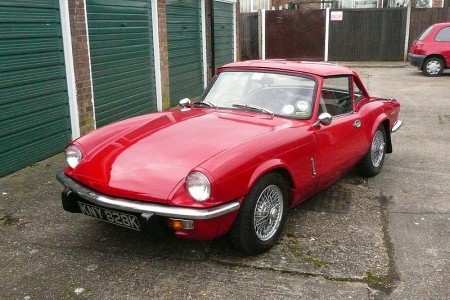 When talking about British classic sports cars, the Triumph Spitfire is one of the most emblematic cars in British history.  The Spitfire is a small two-seat convertible sports car that was introduced for the first time at the London Motor Show in 1962. The design of the Triumph Spitfire was mainly based on the Standard-Triumph 1957 designed by Giovanni Michelloti, and it was created with the purpose of competing in the small sports car category. The chassis of the Spitfire was reinforced with structural components within the bodywork, in order to provide more rigidity.

These are the 5 Spitfire Models that were produced

During production time, Triumph produced 5 Spitfire models, which are described as follows:

The Triumph Mark II was very similar to the Mark I but it had an improved and more highly tuned engine. This sports car was launched in 1965. Other modifications of the Mark II were the new grill and badges in the exterior of the car, while in the interior the car seats were resigned. The Mark II had an engine of 1.1-liter with 4-cylinders that produced 67 hp, and was produced until 1967.

Stay tuned for our next blog with the other three models of the amazing Triumph Spitfire.

The Triumph Spitfire Mark III was launched in 1967 and had several modifications in regards the Spitfire II. The bumper of the Mark III was changed in order to comply with the new car crash regulations. In the rear of the car, the over-riders of the bumpers were taken away and a standard reversing light was added to the car. The interior of the Mark III was improved with wood-veneer instrument surround. The Spitfire Mark III had an engine of 1.3-liter with 4-cylinders that produced 74 hp. It was produced until 1970.

The Triumph Spitfire Mark IV was launched in 1970 with a complete renovation of the previous Spitfire designs. The most significant change of the Mark IV was the rear suspension of the car which was completely redesigned. The rear end of the car was cut-off and the front end was redesigned with a new bonnet. The interior of the vehicle was improved with a full-width dashboard.  The Spitfire Mark IV had a 1.3-liter engine with 4-cylinders that produced 63 hp. It was produced until 1974.

At Sports Car Craftsmen we specialize in the Service, Repair And Restoration Of Triumph Classic Sports Cars, and we know Spitfire owners love their car and appreciate the history of where it comes from.

Our shop provides the best service for Triumph and all vintage British Sports Cars in Colorado. We have the best experienced staff available for you and for any service your Triumph classic sports car may need, from a simple tune-up and oil change, to engine rebuilds or a full-scale restoration.