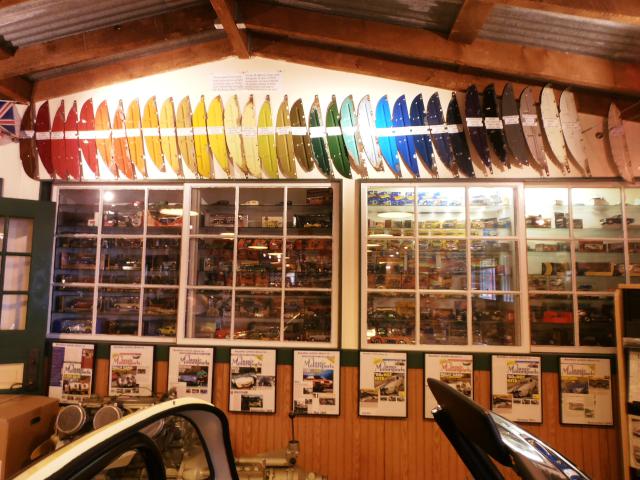 When it comes time for a new paint job for your British sports car, it is tempting to head down to the local budget-oriented paint shop for the $499 deal, pick out a flashy color, and be done with whole ordeal as quickly as possible. As we’ve discussed elsewhere , getting a paint job done properly requires many hours of labor — disassembling, repairing, sanding, painting, and reassembling all components on the car. Yet such attention to detail produces an outstanding result which will last for years to come.
Painting you British Sports Car 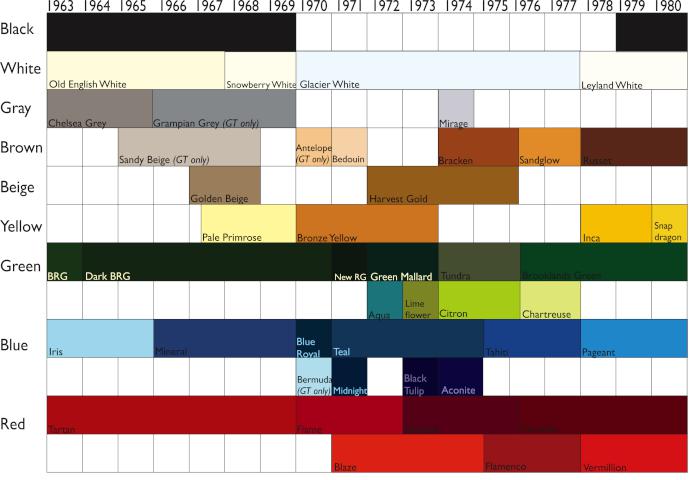 Having the right foundation sets up a car for a proper paint job, but there is another aspect to the venture that needs to be addressed before the project is completed: the color. The classic British sports car is a product of its time. This results in odd quirks (like a windscreen with 3 wipers on the American market), and certain technical limitations (have you ever tried driving your car up steep mountain passes?). But cars from this era also lend themselves to certain aesthetics and color schemes. An MGB looks fantastic in Carmine red, but in a modern Mustang red it looks garish — a bit like a toddler trying on mom’s makeup. Being able to select a color that is sympathetic and complementary to your MGB’s appearance is not incredibly difficult, but it does require a bit of background knowledge.

Between 1963 and 1980, MGBs sported 44 different colors in the American market 4 of which were offered for GTs exclusively. These colors were not offered simultaneously, but in waves lasting anywhere from one year to seven. Finding the perfect color for your car, then, is made easier knowing more about this wide range of original colors. In true Sports Car Craftsmen style, we’ve become a bit obsessed with documenting these color changes. At the shop, we currently have 34 original color samples displayed in our showroom.

We’ve also collated our information into an easy to read graph, organized by year and color. What you see in the graph below is as true as possible to the original color (but which may be some what distorted by your monitor’s settings). Putting these colors into such a chart reveals an interesting pattern — the colors can be (roughly) divided into three different palettes: Pastel (1963-69), Earth Tones (1970-76) and Crayola (1976-80). While there were other colors available in the British and overseas markets, the US market primarily used these colors.

Notably missing from these palettes are the shiny, metallic colors so prevalent on modern cars. MG did make 3 metallic shades (Bronze Metallic, Gold Beige Metallic, and Pewter Metallic), but these colors were only available for a single year, and remain rare as they were not offered in the US market.

Knowing the appropriate colors allows you to choose a color you enjoy and one that will work well with your car. Want a green, but think BRG is overdone? Look at Aqua, Citron or even Limeflower. Want to stick to a classic white? Old English White, Snowberry and Glacier offer subtle differences to distinguish your car. Want to be the only one on your block? Try Black Tulip or Aconite. And of course, there are variations on the classics: eight shades of blue, five shades of dark green, and four shades of dark red. 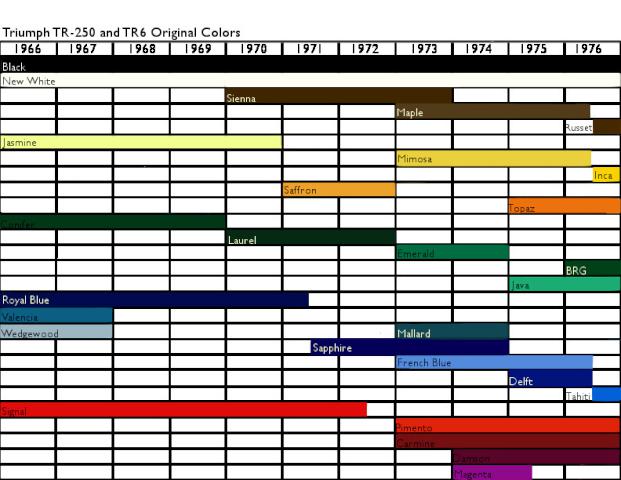 Much like MG, Triumph offered a limited number of paint choices for their TR250 and TR6 models. While Triumph had fewer color options, they shifted palettes over the years, reflecting changes in taste throughout different eras. TR250s offered 8 factory colors, while TR6s featured several more as production went on. Unusual colors such as Damson and Magenta, Delft and Mallard were a departure from the more traditional dark greens, blues, and reds standard on most British cars offered in the era.